Joined by her family above, Kaitlyn Mahnke (right) faces an uncertain future as thyroid cancer continues to be treated. Pictured are her brother Levi, and parents Cory and Eric.
Posted Thursday, June 17, 2021 1:43 pm
Curt Hineline Editor

“It is just amazing how many people have come together to help,” Cory Mahnke said on behalf of her 22-year-old daughter Kaitlyn as she continues her struggle with being diagnosed with thyroid cancer.  Kaitlyn, a 2016 graduate of Logan View and daughter of Eric and Cory Mahnke of Scribner is determined to see life get back to normal after some very difficult recent months. Her friends and family are stepping up to help her along the way.

A fundraiser is planned for Fri.., June 25th for Kaitlyn at the Uehling Auditorium from 6:00-11:00 p.m.  Food will be provided, the Uehling Fire and Rescue will be serving beverages and Silver Moon will perform.  There is also a chance to get in on both a silent and live auction.

Cory said that it was her friend Kari Johnson of Howells that insisted the fundraiser be held.  With that, Kari and others are handling the whole event freeing the Mahnkes to focus on Kaitlyn’s appointments and treatments.

“They have been taking care of everything!  It has been great to see,” Cory said.  Friends from the past and even some unknown family members have shown up for the Mahnkes.  “The drummer for Silver Moon used to be our neighbor when we lived in Fremont!”

The “C” word is something no one wants to hear.  At 22, Kaitlyn, a recent grad of Doane College is excited to continue her education to become a veterinarian.  Imagine her surprise when she was told that the thyroid concerns she has dealt with since seventh grade proved to be more serious than originally anticipated.

Kaitlyn attended Doane on a scholarship as a pole vaulter.  It was hard for the family to swallow the thought of cancer.  Cory said that Kaitlyn is dealing with the diagnosis in her time and in her way.  Since the initial devastation felt and the eventual removal of her entire thyroid, one half at a time in hopes that it stopped the cancer, Kaitlyn continues to get back into a routine.

She has gone back to work at Pink Tuesday dog groomers in Elkhorn and enjoys caring for small animals.

Her mom said that the most recent biopsies show that the cancer had affected her lymphatic system.  Fortunately, the tissue around the lymph nodes tested has not shown signs of cancer.  She has already undergone one treatment of radioactive iodine and will undergo another with hope that it kills the cancer cells.

As the family awaits an update on the success of these treatments in August, they are grateful for the continued support.

Back to school again

Mayor Andy Fuston is back home

The changing of the guard 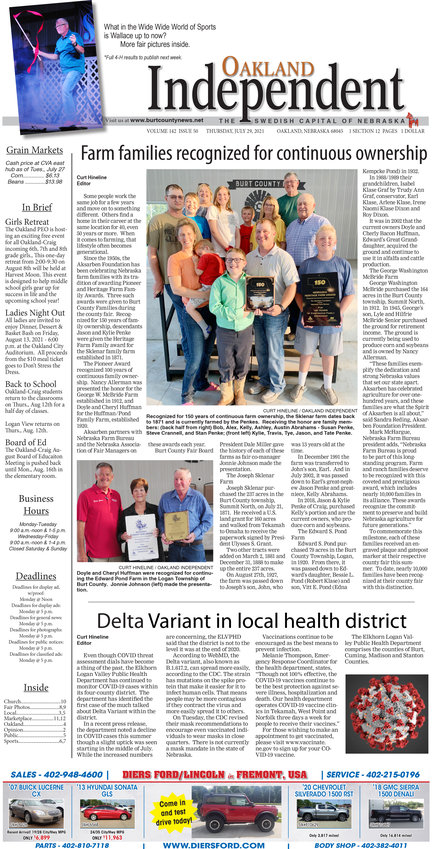