Following updates on emergency management in Burt County at the regular meeting of the Burt County Board of Supervisors on Tuesday, Emergency Manager Andrew Donawa announced his resignation, effective Oct. 31. Donawa started the position Oct. 1, 2020.

“I told human resources that I would stay on as a contractor if you're all OK with it until you hire someone because there's so much stuff going on in the emergency management office right now and I don't want the office to be without somebody to help with the transition,” he said.

The board members congratulated him and wished him well on his new position.

In the year he accomplished several things, including getting a new 911 system, more training to the first responders for them to train as a whole with all five cities and departments having education and training together and updating the local emergency operation plan, which is happening now.

“I hate to see him go,” Chairman David Schold said. “He was good and knows what he is doing.”

There have been three emergency managers in two and a half years, including Josie Oliver and David Six.

“I am leaving because there is no support from the board and they don't want to educate themselves on what emergency management is,” Donawa said in an interview with the Oakland Independent following the meeting. “That's the reason I'm leaving.”

Donawa said he has the full support of the first responders, though.
“The whole thing the board doesn't understand is they want to wait until something happens to be reactive. We are going to lose someone if that happens,” he said. “Someone is going to get killed because of us being reactive instead of proactive.”

Moving on after 10 years at Happy Days

End of an era on the Webster Farm

Some people just can’t seem to color within the lines

Moving on after 10 years at Happy Days

A Minute with the Mayor

Burt county starts the search for the new Emergency Manager

End of an era on the Webster Farm

Some people just can’t seem to color within the lines 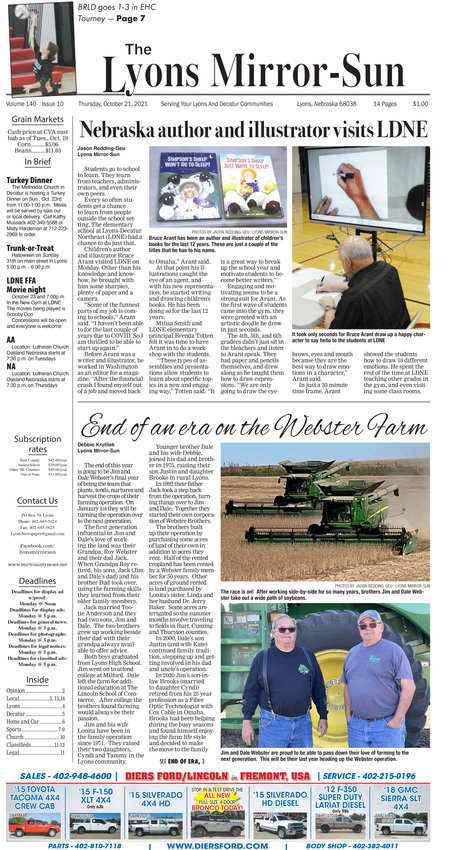